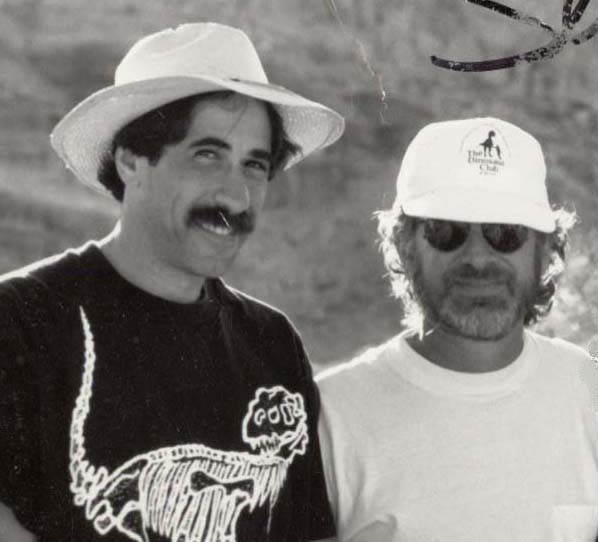 Within a dusty hole, a dozen diggers were arrayed along the length of a half-exposed skeleton, scraping at its margins. I recognized the long shadows and orange glow of late afternoon on a barren horizon from half a dozen summers of excavating in the Montana Badlands.

Only all these workers were fakes. So was the fiberglass skeleton. Even the hole was ersatz. As the quarry sat within the well-policed confines of a state park where no digging is permitted, Hollywood scenic magicians had built rock pile boundaries to create the faux cavity at ground level. The late afternoon was itself a sham – towers of powerful lights were arrayed so expertly around the quarry as to create an instant crepuscular “golden hour.” It was, in fact, 11:30 in the morning.

On close inspection, some details of the elaborate reproduction were unconvincing. The diggers wore button-down shirts. And they were far too good-looking, especially the lead actors, effervescent Laura Dern and irascible Sam Neill. I could supply rattier T-shirts, but not unsightlier actors. The only one on set who looked like the non-beautiful people I live among was a scruffy little guy in the chair in the front row directing it all.

I watched the shooting in tow of a third-tier assistant producer, behind a phalanx of dozens of gaffers, best boys and other characters with equally obscure titles and tasks. “Action,” an assistant barked. Ms. Dern eyed a projection of a dinosaur skeleton on a Hollywood invention I’ve often wished was real – a device to detect underground fossils. On the gizmo’s flickering screen, the dinosaur’s tail curled back toward its head. “It took millions of years to get like this,” she intoned.

“But that’s wrong,” I whispered the assistant. “It’s rigor mortis that curls the tail. Happens in a few hours after death.”

I rued my words instantly, as I saw the assistant move up to whisper in Spielberg’s ear. Ten minutes on the set and already my big mouth was going to get me the boot. The set went quiet as Spielberg turned toward me, a nightmare version of a Merrill/Lynch commercial. He motioned me up beside his chair. He handed me the script. “Could you rewrite the line, please?”

Welcome to Jurassic Park, “Dino” Don. And the peculiar role of science advisor to movies with precious little science in them.